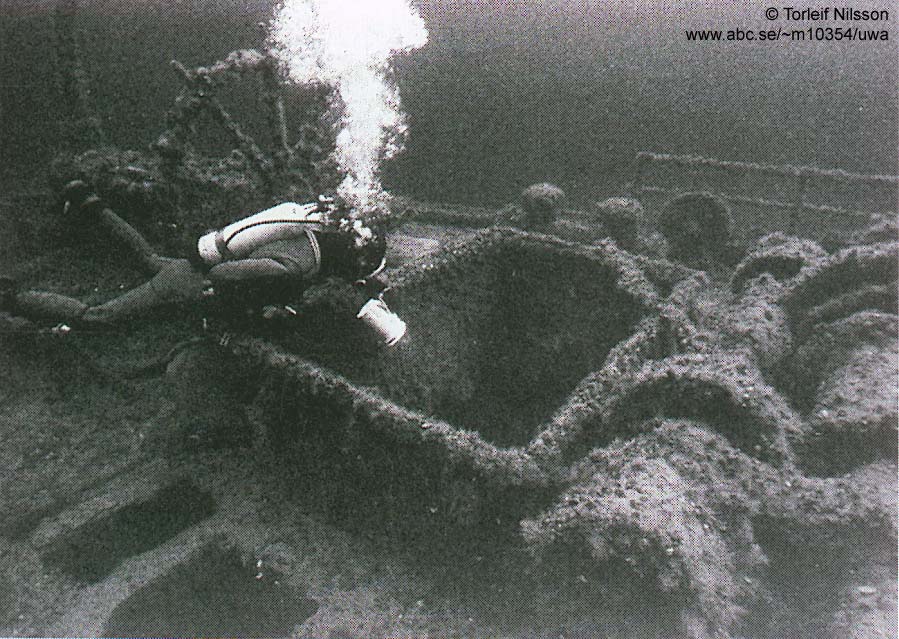 Wreck diving has always had a strange attraction to me, sometimes the stark lines and foreboding dark places that become friendly and open with the help of your torch , other times the serenity of an older wreck, the peace and quiet that surrounds the final resting place of something great that once gracefully sailed the oceans. The history of the wreck never really interested me until I had the opportunity last month to dive 5 wrecks that were all sunk on the same day by the same submarine with no loss of life…this is the story… I found myself in a sunny Sweden in May, on my birthday, travelling to the little hamlet of Sandhamn in the south of the country with 6 other “hardened” Danish, Norwegian and Czechoslovakian divers.  First “shock” the boertjie got was getting barefoot into the water to help launch the boat…6 degrees…that’s when I should have left, but being South African with Dutch forefathers ( read “thick..”) I decided to carry on. We kitted up (all on twinsets – full techie setup!!) had some real Biltong and jumped in the duck and off we went….1 hour and 45 km later we stopped!! (remember, I thought going to the Produce on Aliwal is a long boat ride…)
Nico, our very competent skipper, anchored on the first wreck and we started kitting up. I had my trusty (yet slightly leaky..) drysuit on with my Otter undergarment (and nothing else..) which has done faithful duty on many a “cold” ( 17 Deg C) cave dive with relatively long deco stops. We were all on Nitrox 36 and had a Nitrox 70 for deco gas, (strange deco gas but that’s what we had!) After the standard backroll entry we proceeded down the anchor line to the wreck of the SS Director Reppenhagen, the wreck lies upright and is beautifully preserved in the icy cold waters, viz was up to 15 meters and the water, totally devoid of fish life, a strange green colour. That’s when I realised that I could not feel my lips..or hands…or feet ..a glance at my computer confirmed what my body had been trying to tell me!!! 4 degrees C! The deco stop was sheer hell and getting out of my equipment next to the boat with absolutely no feeling in my entire body was described as “comical” by the others.. they were wearing thermal underwear with all the clothes they possess under their drysuits…
We headed back in the “afternoon” – it was 7 o’clock and the sun was still up!! got back to our guest house and while planning the next days diving, and finding warm underwear, gloves, hoodies and more warm stuff to wear on the next dive, I discovered the story of the “E-19 Massacre” and the wrecks we were diving…. The English submarine H.M.S E-19, under the command of Lieutenant Commander Francis Cromie, manages in September 1915, as the last of five submarines, to go through the small straight of Oresund, into the Baltic Sea. His task; to disturb the German iron ore traffic through the Baltic, vital to the German war effort.

But Cromie is not a happy puppy… His first day had not gone well. He had attacked the German steamer Luleå in the south Baltic. None of his four torpedoes worked, one changed course and missed E19 by only 15 meters, and he had to withdraw. But the next day exceeded all expectations…. Lying south of Öland at 8.30 in the morning of 11th October 1915 ,Cromie sights S.S. Walter Leonard, a 75 m long German freighter of 1261 tons with iron ore and pulp destined for Germany. This is still a “gentlemen’s war” so, after identifying her as German, he politely asks the crew to man the lifeboats, asks a passing Swedish ship to pick them up and then he sinks Walter Leonard with explosives placed in the hold!
The time is 11.15.
Immediately after the Walter Leonard’s sinking, a new ship is sighted, the S.S. Germania. She had noticed Walter Leonard going down and tries to flee but runs aground on the Swedish coast. The crew abandons her and E-19 goes up alongside her. For an hour they loot Germania and after placing explosives in her go out to sea again. The steamer was later salvaged and repaired.

Immediately Cromie sights a new target, the 97m long S.S. Gutrune. She was an impressive ship of 3039 tons, a combined cargo and passenger steamer, destined for Germany with iron ore.E-19 intercepts her and once again the crew is asked to leave their ship. Once again they are picked up by a passing Swedish ship. Gutrune is sunk by opening the sea cocks.

While checking the nationality of another ship, that turned out to be Swedish, E-19 sights a fourth German ship, S.S. Director Reppenhagen , built in 1893, 1683 tons and 80 m long, with iron ore. The by now well known procedure of asking the crew to leave the ship and then opening the sea cocks is repeated.
The sun was getting low at 5h30 pm but just before dark Cromie sights his last victim, S.S. Nicomedia, 117 m, 1901, a steamer of 4391 tons. The same procedure takes place but not until the boarding crew is invited for a glass of beer and a barrel of beer is sent to the rest of E19’s crew! But to no avail, Nicomedia suffers the same fate as all the others. The crew manages to reach shore in their lifeboats.

So the English submarine E19 had managed to destroy five German ships in one day without using any torpedoes or anyone getting hurt! However, for many years the whole story was forgotten.

During the summers of 1983-84 all the remaining wrecks were located. Several of the wrecks interiors were extremely well preserved. Cabin doors and furniture were still in place. Curtains were still hanging and other textiles were preserved as well. Inside Director Reppenhagen, mirrors were still hanging on the walls. The wrecks were documented by photo and in 1985 they were video filmed. There was also correspondence with Mr. Ben Benson, the last surviving member of E-19’s crew, who died shortly afterwards in 1985.
Now, 25 years after the initial investigation, some of the deck structures have started to collapse under their own weight. This is probably due to rusting after nearly a century. This is typical of the Baltic Sea, where iron rusts gradually, but organic matter can be preserved for centuries.

The beer story has a continuation. When diver Stefan Fransson found cases of the beer on Nicomedia, he found that it was still drinkable! Perhaps this was the same beer that was offered to E-19.!The idea came up to extract the yeast organisms from that beer and brew the same beer again. It was a success and a special “Wreckbeer” can now be bought in Sweden!

Like Arnold said… “I‘ll be back!!” I am going back in November, with warm clothes and a non leaking drysuit, to do more dives on these wrecks and maybe to sample some “Wreck Beer”!!